“Fair is not always equal ~ Equal is not always Fair.” This came out of my mouth on practically a weekly basis when I was raising my children. I find these days, as I go through hard situations with other adults, this is something I think, and sometimes, even say, far more frequently than I did back then.

We are raised these days to think that everyone is entitled. We are conditioned to think that everyone should get the same things, and if we aren’t, that something is wrong. But the thing about it is ~ life is conditional. People are in different places, walking out different circumstances, and need different things when it comes to what is best for them. And if you look at the Bible as a whole, this is how Jesus healed, taught, and walked.

Jesus was a rebel in His day. He still is! But not for the sake of being one – and not because He is on a rampage to show how great He is ~ calling everybody out and putting everyone in their place was not the motivation, although that had to happen in order to stand for what is right in God’s eyes. He was and is seen as a rebel simply because doing things the way that God intends is ALWAYS going to buck the system of man. Period.

Like so many others, there is another verse in the Bible that I find keeps getting twisted, used, distorted, for selfish gain. “There is no partiality with God.” (Romans 2:11)  In this section of scripture, we are told that no matter who we are, Jew or Gentile, God will not consider that which is outward when He makes his final judgements. Our outward appearance won’t matter. Our cultural or religious advantages, titles, and other things -not gonna help us out a whole lot. None of the outward things will give us a leg up when it comes to how God sees us.

God looks for what we do with what we know in our hearts to be true about Him. He looks on the inside. And He even goes beyond OUR hearts, and looks for whether we have accepted Christ Jesus into our hearts as Savior and Lord.  It may not seem “fair”, but we are all given a choice – in that way, it really is. We often tend to forget about that fact.

In this way, there will be a division – make no mistake about it, friends. Some will choose not to accept Jesus and the salvation He has freely offered us and rely solely upon their own good deeds or outward appearance and take their chances. Some will go through the motions, looking all bright and shiny on the outside, but not giving a hoot about what is there on the inside. Regardless, we stand no chance if we don’t accept Christ as our Savior so we can be seen as spotless in the eyes of the Lord.

And as we walk this earth, if we are true followers after Christ, we are going to have to become rebels too. The hard part is to do this when it is appropriate, without tossing the rest of scripture out the window, without sinning as we do what is right, and relying upon Him for help, rather than ourselves. God help us all.

So. We are to do what is right, and that doesn’t always seem “fair.” We are to stand for Jesus, and that can seem unbalanced at times (not equal). In some ways, the concept of fairness and equality can often seem evil to me now – it’s become so distorted.

I know this, because as a young child, living in the flesh and totally self-centered, I found myself always saying “that’s not fair” when I didn’t get what I wanted. Now, I find myself saying “that doesn’t seem RIGHT” a lot more.

Go ahead – don’t be afraid of the crashing judgment people will bring down upon your head for doing it.  Just say it with me: “That doesn’t seem RIGHT.”

I’ve been thinking a lot lately about the woman who was about to be stoned for her adultery and how Jesus came up and showed ever-so-clearly, what it means to stand for what is RIGHT versus what seemed FAIR or EQUAL at the time. Let me tell you – in this particular situation – Jesus showed some serious “partiality”, friends. What he did looked biased. What he did was dangerous.

But it was RIGHT.

In the culture of the day, the men had a legal excuse to stone this “adulterous” woman. It was beyond “acceptable” to do so, it had been made into law.  Regardless of the fact that she had to have had a few partners to commit such a crime (who happened to be men? – just sayin’) she was the target for “death to the sinner” in this situation. They were out to get her – let her have it – and wanted Jesus to tell them it was okay to do it.

What did Jesus do? Did he follow the fair game rules of the day or what was culturally and legally accepted? Did he allow the men to carry out the sentence of death against this woman for her crimes and sins, because to them, it was only fair and just that they be not only allowed to do so, but they get his BLESSING in the process? Did I say already that they were more than “justified” through their customs and laws to give it more credence?

Did Jesus say that we needed to obey them and even go along with this death sentence in this situation or just walk on by and remain silent?

He not only stood up for the woman, and met her right where she was at, but he drew a line in the sand. He stood for what was RIGHT. He stood for mercy, compassion, love and grace. He defied the authority of the day to do what was right. And he didn’t bypass truth in the process. He addressed her sin, but not until he made sure she knew she was not condemned first. More importantly, he addressed the sin of the men on the other side of the line. To be even more specific – he dared them to address it themselves.

He took a stand for what was RIGHT. He drew that line in the sand.

He turned the law right on its head. He challenged their “authority” because the situation called for it. And he did the whole thing without sinning.

Jesus then got down on the level with the woman – the so called sole sinner, (the target) in this particular scenario- the one who by law, justifiably and fairly for the day, could be stoned. She was a home wrecker – she was an immoral adulteress ~ she was in their eyes, a temptress who was leading the poor men of the day into sin. And no one cared about the circumstances or if she had been threatened into the immoral situation she found herself in or not.

When they kept on questioning him, he straightened up and said to them, “Let any one of you who is without sin be the first to throw a stone at her.” John 8:7

He REINFORCED the line.  He then moved right into the line of fire WITH her. They would have to risk hitting him as well if they start firing away. No mistake about it. The men dropped their stones and left

And this is love. This is truth. This is Jesus.

Jesus risked everything of earthly value for the sinner – the woman. He risked his reputation to even be SEEN with her, let alone appearing to be “on her side.” He risked his life. He ensured she knew she was not condemned. And then, after earning her trust, he shared that she should go and sin no more. Just like he would for anyone else in the same situation.

Is there something you feel you must do – a line in the sand you have to draw, that to the world, even the Christian one, will not seem fair, unbiased, or just in the eyes of man? If you have brought this to the Lord in prayer and He is reinforcing it, go ahead then and do it.  And know that it will be hard. Are you feeling the Holy Spirit moving you to do something that you just know, after a lot of prayer and listening, is right? But wow, oh wow, is it ever dangerous! Test the spirits – make sure it’s from the Lord and not your flesh. And the more you pray, the more clear it will become. And get ready – it’s not going to be easy – it never is and it will involve some serious risk and probably a whole load of suffering you weren’t wanting to invite in to your life. But God’s got you – right in the palm of His hand. 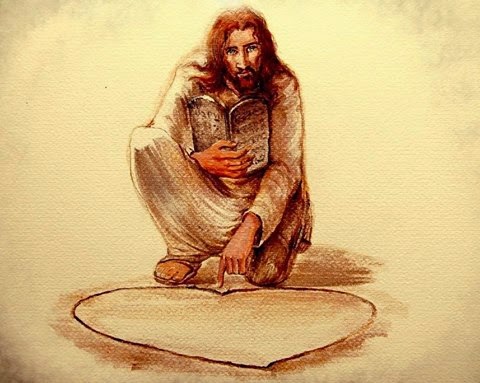