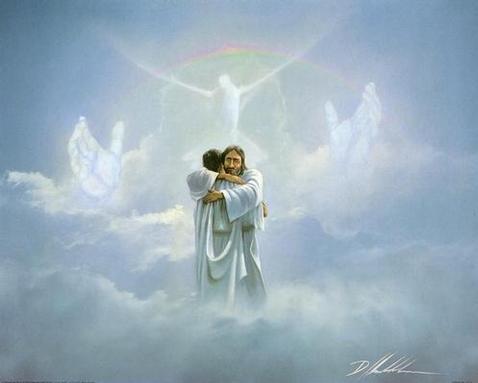 My brother-in-law passed away yesterday (Thursday) morning. His name was David. I called him Dave.

I won’t be writing an obituary tonight for Dave. I won’t be writing about all of his awesome character traits and funny stories, great nicknames, and accomplishments.
I will say he had one of the most tender hearts for people that I ever knew. But I can’t do him justice in that way just yet – he was just too cool – trust me.

But, the biggest reason why I can’t do that is that I experienced something with God and with Dave that transcends all of that – thus, the rest just pales in comparison right about now. That’s because Dave died in my arms yesterday morning. Yes, me…his sister-in-law.

I believe the reason for this is that as we prayed to the Lord for David to fully surrender to Jesus Christ if he hadn’t done so already, it was time for there to be no barriers in the way of that surrender. When one is crumpled on the floor taking their last breaths and facing eternity, being concerned about how a family member – a brother, a mother, a father, might feel or be traumatized can get in the way of surrender. This is just what I personally believe may have been a reason that the Lord chose me to be the one to be with Dave.

God didn’t want Dave to be alone through this, and He made it clear that He didn’t want anything to stand in the way of the chance for full surrender – not worrying about how frail or weak he might look to his loved ones, not being concerned with scarring them for life, or not being embarrassed about being in that state in front of others – just being focused upon letting all of this life go and making the choice as to where he would start his new life (the forever one).

That speaks volumes as to how merciful and compassionate our Lord is regarding one of his own who had became lost during part of his life on this earth.

In the last three years (roughly) I have been in the presence of four people as they are beginning to leave their earthly body and earth-bound life and cross over into eternity. The first was my mother. Then, three months later, my grandpa (her dad). Then, a month after that, a girl that I worked with. And yesterday, my dear Dave.

I can’t write about it all right now, but I do want to share something with you about this today. Something very strange – very aweseome – very exhausting – and most of all, VERY difficult to explain in words happens when you are in this “state” with another person who is leaving this earth. It is not made up or imagined. It is not mere adrenaline or shock coursing through your veins. It is not trauma alone that makes you feel you aren’t “all there” during, and then after for a while. All of those factors are present, for sure. But there’s something more happening than all that – and it’s impossible not to see it, feel it, KNOW it when it is there.

It truly is something not fully of this realm that you experience. And it’s also an honor and a privilege to be invited into an experience like this by God and for that person.

For me, this doesn’t just go away once the person or loved one passes away. It sticks around with you for a while after. This sticking thing varies in how long it lasts from situation to situation or person to person. With regard to my mother, my brothers and her sisters were present as well. But I don’t think it unstuck (for me) for several days. Really, it might have been weeks.

It’s as though you are still firmly planted in this world, yet one toe of your other leg is just dipped into another realm with that person as they are passing out of this world and into the next. As soon as they leave entirely, you think you have both feet fully back, but in reality, something is still sticking with you there as you begin to walk fully in this realm again (now that they have left).

Here’s one other way to explain it…..

Then there are the layers of feeling God’s presence in the “normal” way that you feel it, and sensing and experiencing His presence in this different way. You know He is there in a new or different way than you normally feel it, but He is being seen by the person passing away in ways that you cannot see Him. You just know He’s there. You can feel it with every fiber of your being.

For me, I get tingles throughout my body while it’s happening too. Not a tingle here or there, but a “filled with tingles” thing that sticks around – VERY intensely the whole time it’s happening, and then residual for a day or day and a half after.

Something different happened this time though. I was in Wal-mart on Wednesday and thinking about Dave. This was the day before he passed away, friends. I was walking into the store and said a prayer for him – “God, I am concerned about Dave as he hurt himself pretty badly last night – I am concerned he may not make it through surgery on Friday.” And as I was saying in my mind/prayer the word surgery, I got through the first syllable and the tingles came.

I have had these tingles before, especially over the last year. They happen in church a lot, and sometimes when I am praying. This is fairly new for me though. The only other times I had them before was when mom, gramps, and that young lady died. But now they happen randomly.

But I kid you not: When this happened in Walmart as I was praying for Dave, I temporarily got a bit freaked out. I really and truly did pause and wonder (after finishing that prayer) “God, is he going to pass away soon?”

My husband (his beloved brother) and the rest of Dave’s family did indeed know that he had serious health problems, and I am sure at several points in time have wondered how much longer he might have left in this world. But you still think it’s going to be longer than it really is, you know?

But at Walmart, I really was freaked out. I wondered if this was God’s way of telling me that it wasn’t just a gut feeling – that it was true Dave would not be lasting much longer in this earthly body. The tingles came, and I conversed more with God and just resolved to place it in His hands. I figured that the tingles may be the Spirit of the Lord just filling me with love for Dave and letting me know He is hearing my prayer, or it could possibly be that He was filling me with His Spirit for some other unknown reason. I didn’t know, but I knew it was God.

The next day, through a series of unplanned events, (not planned out by me) it was me who was chosen or needed to go by Dave’s apartment to get some Tylenol to him – something not ordinarily that would have been me.

I have far greater concerns and things I am focusing upon with Dave’s passing away right now than myself or my own story about how I was involved in it. There are a lot of different blog posts that I could have written tonight. But I felt that God wanted me to share this with you today for a reason. I am more concerned with Dave’s brothers and parents, his other family members, the grief they are experiencing right now than anything else. But I believe the Lord wants me to share this today with you my friends.

The pull into that realm (the one that makes up eternity – the One where God reveals Himself in a different way than what we can experience here on this earth) is POWERFUL beyond belief. There is no way whatsoever I could explain away this “pull” – this “sticky” this surreal-seeming thing by mere shock, adrenaline, or other stuff. And I tell you it’s real. I tell you God is real. And you don’t want to miss this.

Jesus Christ is waiting for every one of us to accept Him as our Savior so that we can enter into God’s presence – so He can fill us with His Holy Spirit (our helper) now, while we still reside here, but usher us into the fullness of His presence when we move into eternity.

Please, if you haven’t accepted Him as your Lord and Savior, would you do so today? It can happen in the flash of an eye, moving out of this life into eternity. Anything can happen any time. Any second.

And if you already follow after Christ with all that you are, but you know someone who hasn’t made that important heart decision – consider the fact that they will likely be grateful that you chose to share Jesus with them – if not now – when they are taking their last breath.

We need to be bold for Christ now, dear friends. We need to share His grace and mercy and love with others. Time is short. So is this life.

But eternity is a forever kind of thing. And so is our Mighty God.

1 Corinthians 2:7-9 But we  impart a secret and hidden wisdom of God, which God decreed before the ages for  our glory. None of the rulers of this age understood this, for if they had, they  would not have crucified the Lord of glory. But, as it is written,”What no eye  has seen, nor ear heard, nor the heart of man imagined, what God has prepared  for those who love him” 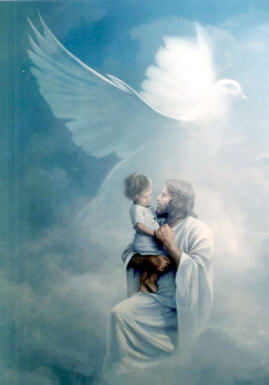 17 thoughts on “A Forever Thing”